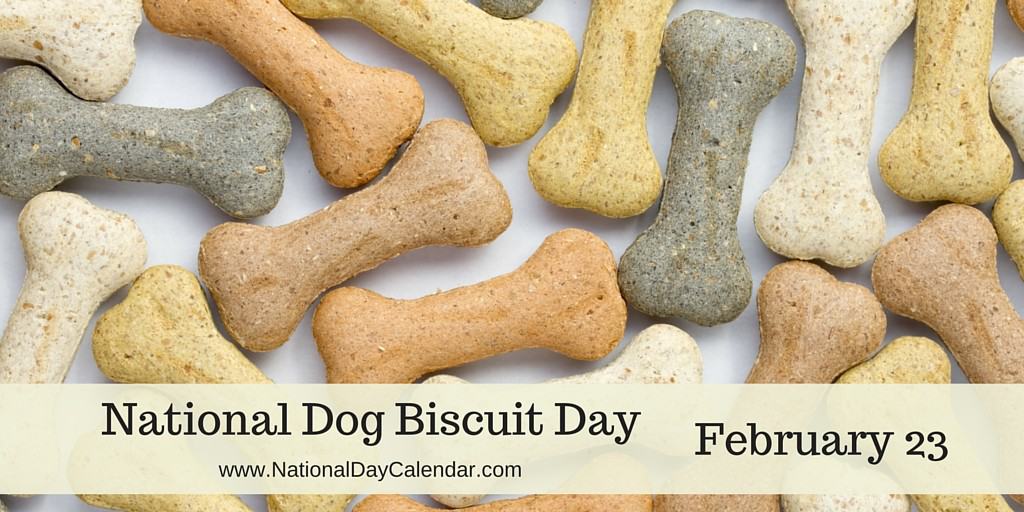 If your dog could talk, he would tell you how excited he is that National Dog Biscuit Day is on February 23rd.  This day is celebrated here in the United States and around the world. Dog biscuits, or dog bread, have been around since Roman times.  The origin of Dog bread was that the bread was not fit for humans; it was old or of bad quality, so they gave it to the dogs.

An American inventor, James Pratt, created the first known dog biscuits we know of today, sometime in the 19th century.  He came up with a secret recipe for “dog cakes” made up of meat and vegetables. The “dog cakes” were first sold to English countrymen for their sporting dogs.  Then, they were introduced in America and marketed at dog shows. Spratt’s product was supplied to army dogs during WWI. And, in 1907 Spratt made his first bone-shaped biscuit, known as Milk Bone. Milk Bone was bought by Nabisco in 1931 and acquired by General Mills in 1950.

Since then, dog biscuits have come a long way. There is a huge market for them, since so many people own dogs. There are hundreds of varieties of biscuits today; chewy treats, crunchy treats, soft treats, freeze dried or jerky treats, dental chews, bone-like chews, pig ears, rawhide, and the list goes on and on.

Chewing comes natural for dogs. They explore through chewing! Chewing helps dogs to exercise their jaw and sometimes clean their teeth. It keeps them occupied and gives them something to focus on. When a dog doesn’t have anything to chew on he can become destructive and start chewing on your furniture or other things around the house.

On any other day, you might give your furry baby a biscuit as a reward for doing something good or part of their training. But, this is his day…so give him an extra special snack or two.  Dog biscuits may have changed through the years, but one thing has remained the same, dogs still love them and we humans love our dogs!

You can always find plenty of store bought treats. But you can also find thousands of recipes online to make your own yummy homemade goodies. You can also visit a dog bakery, where they specialize in tasty treats for canines. Either way, your pet will be very happy.